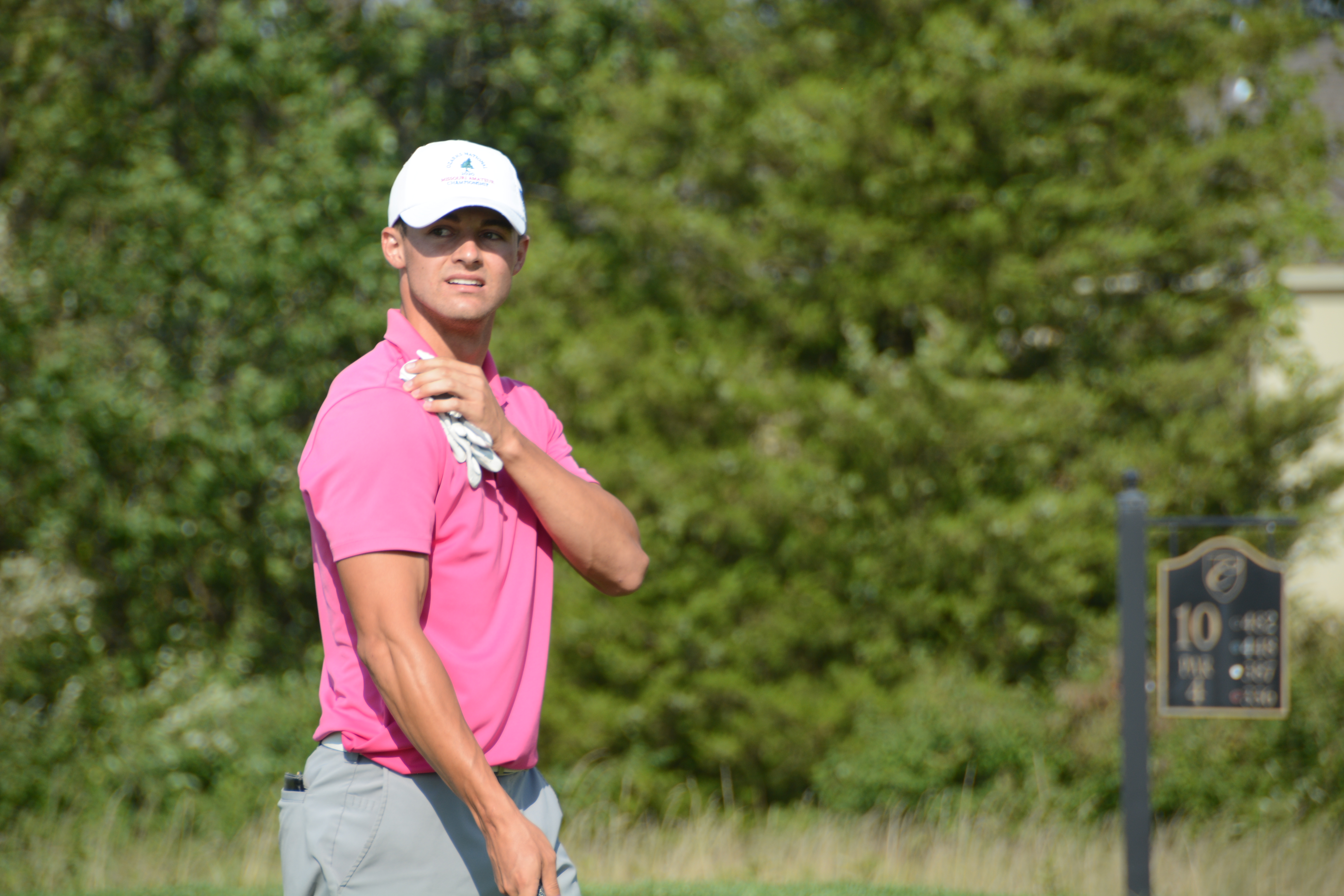 It took extra holes, but Lucas Horseman, Missouri Western State golfer, captured his first KC Amateur victory with an eagle on #18. After 36 holes, Horseman was tied with Ross Steelman, University of Missouri redshirt-sophomore, at a two-day total of 137 (-7). Both players birdied the first playoff hole and re-teed on #18. Horseman made a ten footer for Eagle and it was up to Steelman to make his putt to extend. Steelman fought hard and barely missed his eagle putt to keep the playoff going.

Both players shot 67-70 for their 137 total. Horseman had 14 birdies over his two rounds and despite a few hiccups, seemed calm and collected while on the golf course. Steelman had 9 birdies and one eagle during competition and showed some grit under pressure during the playoff.

The 2020 Kansas City Amateur Championship had to be shortened to 36 holes after Friday’s round was cancelled due to rain and course conditions. Despite the shortened event, the KC Amateur featured some great golf and familiar names.

In our Players division, another playoff occurred to determine our champion. Matt Foster and Nathan Deadmond both finished at 155 (+11) and headed out to #1 tee to begin their playoff. With a birdie on the first, Deadmond claimed his first Player’s title. Gary Gatten and Brian Moeller finished tied for Players Net Champion at 146 (+2).

Our Senior Champion is no stranger to the winner’s circle for Central Links Golf events. Steve Groom shot one-under, 71, for his second round to come from behind and take the title, finishing at 147 (+3). Groom had five birdies over his two rounds of competition, four of them coming on Sunday to help him take the victory. Dave Cunningham and Kevin Rome tied for second at 148 (+4).

Our Legends Champion is none other than Don Kuehn. Kuehn bested the field by two strokes, finishing at 149 (+5). His competition rounds were highlight by six total birdies. Bob Bezek finished in second place with a 151. Jim Moore captured the Legends Net Champion title after his 74-72 rounds to total 146.

Congratulations to all of our winners this weekend and thank you to Creekmoor for continuing to host this event for us. We will see everyone next year at Shoal Creek Golf Course.

Missouri Western State golfer Lucas Horseman and University of Missouri redshirt-sophomore Ross Steelman are tied for the lead after the first round of the Kansas City Amateur after carding five-under, 67. Horseman had eight birdies on the day, four on each nine. Steelman carded six birdies on his round and a single bogey. Four of the size birdies came on the back nine, including one on the Par-5th, 18th hole.

Kansas Amateur Champion, Park Ulrich, sits in solo third after carding a four-under round of 68. Ulrich’s round was highlighted by a double eagle on the Par-5, 9th hole and an eagle on Hole 16. Ulrich also carded a birdie on the Par-4, 2nd hole.

Alex Downing sits in solo fourth heading in to the final round of competition. Downing finished his round at three-under, 69, with six birdies on the day.

In the Senior division, Dave Cunningham leads the competition after an even-par round of 72 with three birdies. Kevin Rome and Brett Allen sit at solo second and third place. Rome shot a one-over, 73, and Allen followed closely behind with a 74.

Don Kuehn leads the Legends division with a two-over round of 74. Bryan Meyer and Nathan Deadmond are tied for the lead in the Players division after rounds of 77.

The Kansas City Amateur Championship continues tomorrow morning with the final round of competition. The event has been shortened to 36 holes after a rain-out on Friday occurred. Final results will be concluded based on total scores after tomorrow’s round. No cut has been made for this year’s competition.