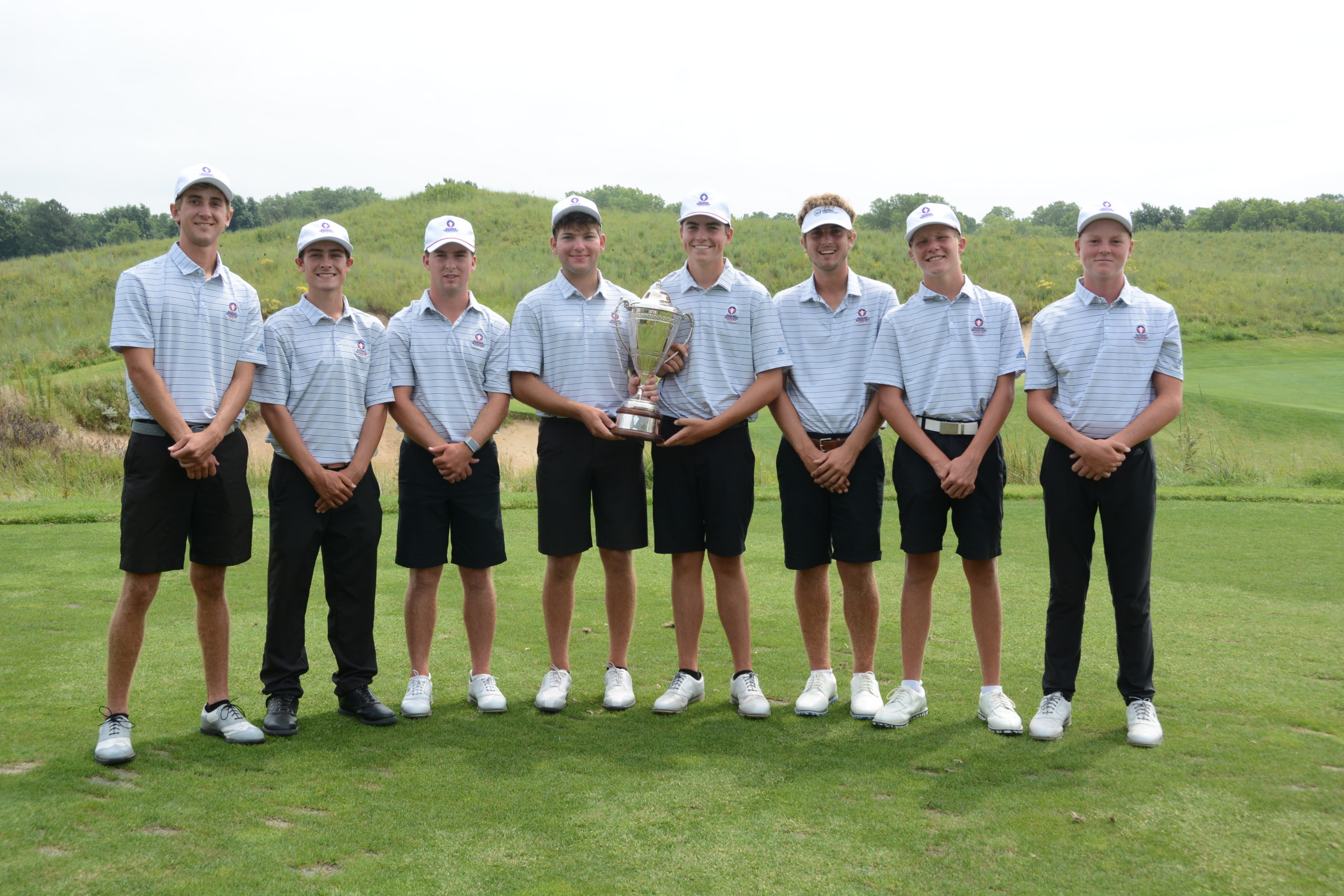 The 2020 KS-NE Junior Cup took place at the one and only Prairie Dunes Country Club in Hutchinson, Kansas and it was one for the books. After losing in 2018 and tying in 2019, Team Kansas was victorious and able to bring the trophy back home.

The Kansas-Nebraska Junior Cup Matches pit the top eight male juniors from Kansas against the same from Nebraska in Ryder Cup-style matches, with history dating back to 1986. The competition begins with Foursomes and Four-Ball matches and concludes with eight Singles matches. Each match is worth one point. The 2020 team consists of Lucas Scheufler, Blake Saffell, Cooper Schultz, Davis Cooper, Will Harding, Calvin Dillon, Ian McCrary, and Caleb Kimmel.

Team Kansas got off to a great start in the morning foursome matches on Wednesday. Lucas Scheufler and Blake Saffell took the first foursomes match 3 & 2 and Ian McCrary and Caleb Kimmel took the second match 4 & 2. Will Harding and Calvin Dillon were close behind with their own victory of 2 & 1. The final foursomes match went to 18 and after a bogey by Team Kansas, the match was tied and each team received a half a point. Kansas was leading 3.5 to .5 after the morning session.

In the afternoon four-ball matches, Kansas and Nebraska split 2 and 2. Scheufler/Saffell continued their momentum with another 3 and 2 win. McCrary/Kimmel also claimed another point for Kansas with a 2 and 1 victory. Schultz/Cooper fell in a close match 2 & 1 and Harding/Dillon fought through a toss 3 & 2 loss. Those two points were big in carrying team momentum and adding to the team total heading in to singles Thursday morning. Kansas led 5.5 to 2.5.

In morning singles, Kansas needed only 3 points to clinch the Cup. Schuefler got Kansas off to a quick start with a 6 & 5 victory in the first match of the day. Cooper Schultz added another point to Team Kansas with his 3 & 2 win. Sitting at 7.5 points, Kansas just needed one more match to clinch.

Nebraska tallied a point after Saffell lost a hard fought match 2 & 1. Davis Cooper ended his match on 15 green, not only winning his match 4 & 3 but clinching the victory for Team Kansas. The remaining singles matches continued on, and Kansas ultimately won two more matches from Kimmel and Harding, ending with a total of 10.5 points.

It was a great two days at Prairie Dunes Country Club and it was a great display of golf by our eight players. They played like a team and it was fun to watch. Congratulations to our five seniors on the team and good luck to them as they move on to college in a couple weeks.

We look forward to heading out to Nebraska in 2021 to defend!