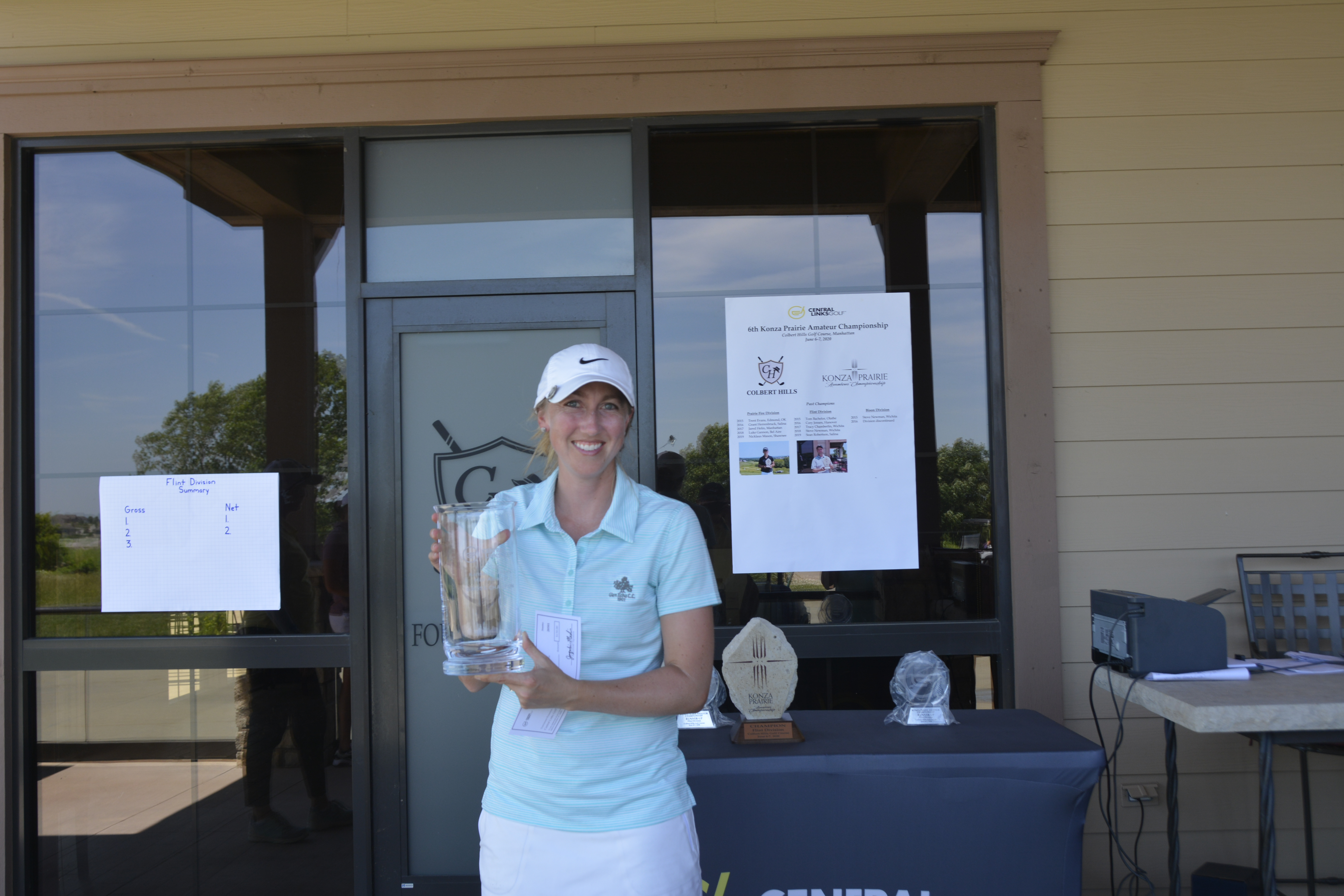 Manhattan, KS – Carmen Titus was all smiles after a fantastic come-from-behind victory in the Kansas Women’s Mid-Amateur Championship today at Colbert Hills GC in Manhattan, Kansas.  This year was especially sweet since it was the championship that got away from her least season.

The field maintained the positions they started in for the most part through the front nine, but the momentum shifted as the final group made the turn.  First round leader Meghan Stasi started the back nine with an uncharacteristic double bogey on the 10th, and a triple bogey on the 11th.  Suddenly, Titus had made up four strokes of the six-stroke deficit she had at the turn.  Stasi got one back with a par to Titus’s bogey on the 12th hole, then another with a birdie on #13.  Titus had a strong finish starting with the 14th hole.  Stasi made triple bogey at the difficult hole as the wind was really picking up, while Titus carded a steady bogey.  Titus made two more birdies at #15 and #16 and finished with two strong pars as the wind continued to howl.

Titus said after the round that this win felt good after losing a big lead last year at about the point on the course where this year’s championship turned around for her. “It was fun being in this position this year after being where Meghan was last year.  I got to be the chaser.” “I just tried to play my own game…I tried to play smart and make pars and let her come back to me, and it worked.”  Titus has a Kansas City Women’s Match Play Championship under her belt and has qualified for several USGA Mid-Amateur Championships including advancing to match play in 2018.  After a great win over a player with multiple national championship wins, she can head into the next qualifying season knowing she can play with anyone in the field.

Alane Studley took home the Overall Net title after a very steady two rounds of play.  She had a rocky stretch on the back nine going bogey-double bogey-bogey on holes #12 through #14.  She regained her composure and finished strong even as the winds were picking up.  Ashley Childers fired a net 74 today including a birdie and an eagle on the back nine, but it wasn’t enough to counter Studley’s consistency.

The next Central Links Golf women’s event is June 15-16 at Smoky Hill CC in Hays, KS at the Tee Fore Two Championship which includes one round of Four Ball and one round of Chapman Alternate Shot.

Stasi had a very steady round with nothing more than a bogey on her card.  She was under par on the difficult par 5s.  Chasing her is Audrey Judd (former University of Nebraska player), Carmen Titus (former Rockhurst University player), and Chloe Kraus (assistant coach at Baker University).  Judd, Titus, and Kraus all gave up some strokes on the par 5s but have plenty of firepower to make a comeback in round two.  Defending champion Katy Winters (Andover, KS) is not out of reach in spite of carding two triple bogeys in her round.  Winters and Martha Linscott (Mission Hills, KS) are tied for 5th with scores of 79.

Alane Studley of St. Joseph, MO leads the Net Division at even par.  Studley finished strong on the difficult back nine.  She kept the ball in play nicely and managed the difficult 10th hole carding one of the few pars in the field.

Play will resume with the final round tomorrow at 7:30am.  The Women’s Mid-Amateur Championship is held annually for women age 20+ who are not on a college golf roster for the fall.