Honoring Outstanding Women in the Golf Hall of Fame 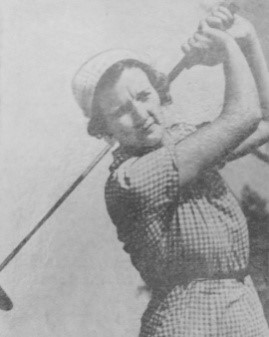 In honor of Women’s History Month, we wanted to highlight the women in Kansas City & Kansas who have made an impact on the game of golf.

Since its establishment in 2012, the centennial year of the KCGA, The Kansas City Golf Hall of Fame has recognized outstanding women who have contributed to the success of the game in the Kansas City region. Each of these Hall of Famers distinguished themselves on, and off, the course.

Here is a brief summary of the accomplishments of these exceptional women:

Miriam Burns (Horn) Tyson began playing golf at an early age under the tutelage of Milburn Head Professional Harry Robb, Sr. She won seven KC Women’s Match Play championships, the Trans-Mississippi, and two Women’s Western Amateurs. However, none of those feats compare to her 1927 victory in the United States Women’s Amateur. She retired from competitive golf at the age of 26, in 1930. Ms. Tyson was a 2013 inductee into the Hall of Fame.

Opal Hill took up the game rather late in life after her doctors advised her to get more fresh air and exercise. She practiced her new-found passion relentlessly and went on to win four Trans-Miss titles, three Women’s Western Amateurs, the North & South, three Missouri Women’s Ams, and two Western Women’s Opens. On the local scene, she captured fourteen Kansas City championships. She became just the third woman to turn professional and was one of the founding members of the LPGA.

Karen (Schull) MacGee graduated from Kansas City’s Southwest High School in 1961 and was already an accomplished player in local events under the guidance of Blue Hills Pro Leland “Duke” Gibson (Hall of Fame 2013). Between 1960 and 1980 she won seven Missouri Women’s Amateurs, five Kansas Women’s Amateurs, and seven Kansas City Match Play Championships. She joined the Hall of Fame in 2014.

Marian Gault lead the Kansas City Golf Association’s Junior Girl’s program for thirteen years, recruiting young players and encouraging them to play the game she loved. She won the Missouri Women’s Amateur in 1952 and ’55 and was runner-up four other times. She won the Kansas City Women’s Match Play six times, was runner-up in three other appearances, and was a qualifying medalist eight times. Gault was recognized as the area’s top woman player in 1948, ’52, ’54, and ’55 and was the first recipient of the Missouri Women’s Golf Association’s Bernice Edlund Award for outstanding conduct, demeanor, and sportsmanship.

Maxine Johnson virtually “owned” the game in and around Kansas City in the period following the Second World War. In the 1950, ’51, and ’52 Women’s Match Play Championships she was runner-up to Marian Gault, but she went on to capture seven titles between 1953 and 1962. She won the Missouri Women’s Amateur in 1951 and was runner-up in 1956 and defeated Hall of Famer Karen (Schull) MacGee for the 1957 title. Playing against the stars of the LPGA in the KC Women’s Open, she was low amateur in 1956 and never finished worse than T-5 (amateur) in the six years in which she competed.

Mary Jane Barnes was the first woman to lead the Kansas City Golf Association as president (2001 – 2003) and her tenure marked a significant turning point for the organization. Under her leadership, the KCGA hired its first full-time Executive Director, expanded tournament opportunities for local players, and increased services to member clubs. Ms. Barnes qualified for three USGA Championships and was the Women’s Club Champion at Kansas City Country Club an unprecedented eighteen times. She served on the USGA’s Women’s Mid-Amateur Committee for 25 years and received the prestigious Ike Granger Award in 2014.

These outstanding Kansas Citians are representative of the many great (and near-great) players who have graced the fairways of the golf courses in our region. The Board of Directors of Central Links Golf is committed to recognizing the accomplishments of all the people, male and female, who continue to distinguish themselves through their accomplishments in the game we all love.

“The goal of the Hall of Fame is to preserve our past and honor the accomplishments of those who made golf in this area great,” said Greg Dunn, president of Central Links Golf. “Our classes of inductees have included amateurs, professionals, men and women, contemporary as well as historic figures, pioneers, golf administrators, superintendents, and teachers. We are very proud that our Hall of Fame is all-inclusive and has recognized the greatest of those who have contributed so much to the enjoyment of our game.”

A number of outstanding women have been inducted into the Kansas Golf Hall of Fame since its founding in 1991. Several professionals, a number of amateurs, and two who were recognized for their contributions to the game. What follows is a brief summary of the accomplishments and contributions of these individuals.

Marge Page joined the Kansas Hall of Fame in 2004 as a Contributor to the Game. She organized the Wichita Junior Golf Foundation in 1973 to give low-income children the opportunity to learn the game of golf. Ms. Page donated or raised money to pay for green fees, lessons, and equipment for the 10-17-year-old golfers and arranged for them to take lessons at public courses during the summer. Decades later, the WJGF continues to serve hundreds of young golfers each year.

Nadine Harrison served as President and Vice President of the Wichita Women’s City Golf Association as well as the President of the Women’s Trans-Mississippi Golf Association. She was appointed to the prestigious Women’s Committee of the USGA and was a rules official at the US Women’s Open and the Curtis Cup. In 1958 she received the Mike Murra Achievement Award recognizing her work with junior golf and promoting golf to the public in Wichita. Ms. Harrison joined the Kansas Hall of Fame in 1994.

Natasha Fife was a five-time Kansas Women’s Amateur Champion and seven-time Senior Amateur Champion along with her seven Wichita Women’s Amateurs and three Broadmoor Amateur titles. She received a Master’s Degree in Physical Education from Wichita State and was named women’s athletic director there, a position she held for thirteen years. The Natasha Fife Women’s Golf scholarship, awarded to members of the WSU women’s golf team honors her dedication to the game and efforts to influence the participation of countless others. She entered the Hall of Fame in 1993.

Jean Ashley Crawford was the dominant force on the amateur golf scene in Kansas from the early 1950s to the mid-’60’s. During that time she finished in the top four in the Kansas Women’s Amateur Championship seven times, was a member of three US Curtis Cup teams (1962, ’64, and ’66) and in 1965 she defeated Anne Quast (5&4) to win the USGA Women’s Amateur Championship. Ms. Crawford was also runner-up in the national amateur on two other occasions (1960 and 1967). She served as non-playing Captain of the Curtis Cup and was on the USGA Women’s Committee. She joined the Hall of Fame in 1992.

Judy Bell accomplished more than perhaps any other woman in advancing the game of golf. Space does not allow a full accounting of her accomplishments, suffice to say, she has been inducted into six different Halls of Fame (including the World Golf HoF); received the Bob Jones Award from the USGA in 2016; was the first woman to serve as President of the USGA; competed in 38 USGA championships; won three KWGA Amateurs (the first at age 15); played on the Curtis Cup teams of 1960 and ’62; Captained the Curtis Cup teams of 1986 and ’88; the USGA Women’s State Team Championship trophy was named in her honor. She joined the Kansas Golf HoF in 1991.

Marilyn Smith holds a place of high honor among Kansas golfers, having won three consecutive Kansas Women’s Amateurs (1946-’48) and the Intercollegiate Golf Championship while playing for the University of Kansas. Smith was one of the 13 founding members of the LPGA and, as a professional, won twenty-two times including two major championships.  Ms. Smith served as president of the LPGA from 1958-’60, during which time she established the LPGA division for teaching and club professionals. After her playing career ended, she turned to teaching. She was inducted into the Kansas Golf Hall of Fame in 1991 and the World Golf Hall of Fame in 2006.

Trailblazers, pioneers, volunteers, accomplished players, and contributors who made the game of golf what it has become today. These outstanding women are representative of so many people who give of themselves to advance the standards we come to expect of ourselves and our fellow players. These Hall of Fame honorees are the “tip of the iceberg” when discussing the state of the game and its rich history in the state of Kansas. Others whose names we may not yet recognize will surely follow their example and etch their names on the trophies and plaques that commemorate the champions of tournaments made possible through Central Links Golf and its member clubs.

Standing on the shoulders of these giants, the future looks very bright, indeed.